Let’s prevent history from repeating itself

Czechoslovakia in 1968 and Ukraine in 2022. Although both instances are about half a century apart, they have a lot in common. The Russians had been preparing for the invasion of Czechoslovakia for some time, claiming that they were only training for military operations. What followed in 1968 in 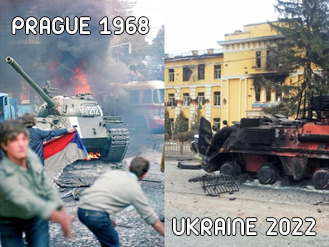 Czechoslovakia was a clear invasion of the country without any official war declaration, even though Czecho­slovakians and Russians were officially allies and promoters of socialism. Similarly, the Russian army had been “exercising” on the borders of Ukraine several weeks prior to the official attack. What is different, however, is that the Czechoslovakian army did not receive any orders to protect the country. Ukraine, on the other hand, has been resisting the aggressor and it can only continue to do so if the funding of the aggressor stops immediately. I sincerely wish that history does not repeat itself and we do not see Russian tanks in the streets of Prague or any other European city ever again. Therefore, we must do everything in our power to stop this senseless aggression now.

Lenka Ulzega, PhD in English Linguistics, is a senior lecturer at ZHAW School of Management and Law, Winter­thur/Switzerland.